In ‘Sullied Sally’ An unsolved murder, more than 40 years in the past, leads to the discovery of a new victim and the return of an old stalker. 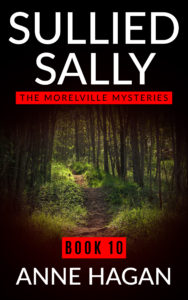 After a blow to the head, Owen Lafferty lied dying, alone in a cabin, far out in the woods and far from home. He was found by Dana Rossi-Crane as she happened along, chasing around the threads of a 1972 unsolved murder involving her mother-in-law, Faye and Owen and his family. Dana’s efforts were, unfortunately, too little, too late to save Owen.

With the two murders 40 some years apart, looking like they’re related, a cast of suspects now in their sixties and seventies and very set in their ways and a wife who won’t stay out of her cases, Sheriff Mel Crane already has her hands full. A new Deputy District Attorney coming in and horning in on her investigation and the return of her old stalker, don’t help matters.

Can Mel solve either case? Can she convince the new Deputy DA that she’s not hiding evidence to protect her family? Is Sally’s reason for showing back up in Mel’s life legitimate or a ruse to get close to her again? Will Dana butt out? Stay tuned!

This book is great together with Books 1-9 of The Morelville Mysteries but it can also be read as a stand-alone mystery.

Where to buy Sullied Sally:

Sullied Sally is available at Amazon as a Kindle eBook (and soon in paperback). You can get it there and at all of the fine retailers below with this link: Sullied Sally

Please check wherever you buy your ebooks. It’s available at hundreds of eBook retailers, worldwide.